Let me explain Linux to you

Linux is the most widely used open source operating system out there.  I use it every day, on my compters at home and at work.  I like it a lot.

It has come to my attention that many people do not know what the fuck it is.  So let me explain.

A guy named Linus Torvalds was studying computer science in college and decided he wanted to make his own computer operating system.  So he did, and he called it (in modest fashion) "Linux".  It's kindof a play between "Linux" and "unix", which is the kind of operating system he copied as a model.

Unix was made originally by Bell Labs originally made in 19 freaking 69 for mainframe computers.  There were many "clones" made over the years, of which Linux was one.

Fast forward to 2012, and you have a much more mature operating system which includes nice, easy to use desktop tools familiar to anyone--which in fact I am using right now: 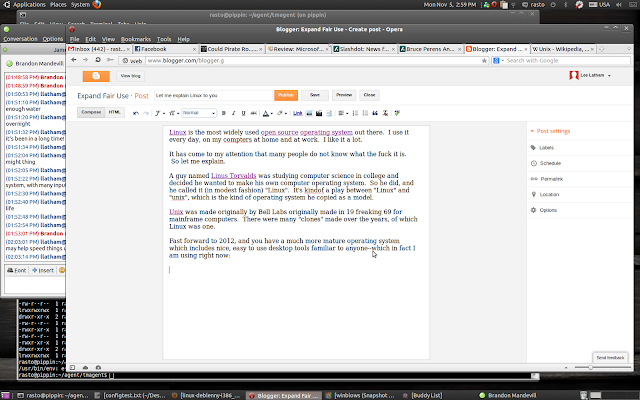 The thing about Linux which kindof confuses people is that there is more than one kind.  In the screenshot above I am using Ubuntu Linux, which I do recommend for beginners.  You can install Ubuntu for free on as many computers as you like--which is true for all decent versions of Linux.  There is no "license check" whatsoever.  Doesn't that freedom sound appealing?

It also comes with tons and tons and tons of free software (legally), which you can install with a click of a mouse.  And none of this stuff is going to spy on you or steal information from your machine.

Android, the mobile phone OS from Google, is a version of Linux for mobile phones.  Android is going to take over the world.

For many years, I've predicted that we would all be using Linux--somehow--by 2020.  I didn't know the form it would take, but it's starting to look like Android.

You will also find Linux in many standalone devices, such as the Boxee box, Roku media player, WDTV, etc.

So you might as well go ahead and try it on your desktop--the sooner the better for the coming Linux revolution.  I could go on for (literally) hours about the many ways it is superior to anything else out there, but it would bore you, and you probably aren't ready for it yet.  :-)

NB: There are versions that are specially made for older computers, such as Xubuntu, so you can extend the life of your crufty old PC.  Sure, you'll wipe out all your data, but that's okay--make backups first.   You'll be amazed at how fast your old machine is once you get that nasty Windows install off it!