Admittedly, our crusty two party political system tends to be pretty stagnant--as the founding fathers intended, but it's still important to vote, and to be politically active.

Today when I was out for my morning constitutional, I kept noticing other pedestrians who looked like me but speaking Spanish to each other.  Eventually as I got near an office building near my house I saw that it was a Venezuelan polling station. 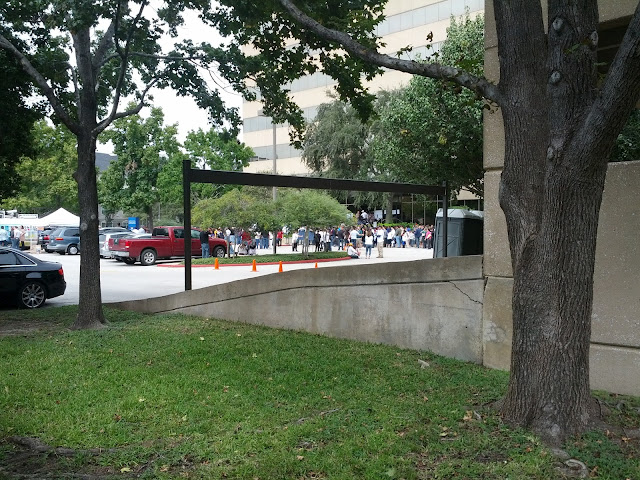 This really isn't the best picture, but you can kinda see a tent set up on the left and there was a news van there.  But more important is what you don't see, which is the people lined up on the other side of the building, too.  I suspect every Venezuelan in Houston was making a real point of voting today in their momentous election.

I bring this up at all because, after all, the purpose of this blog is to promote a change in the law.  This requires political action, and even before that it requires convincing people.

It's a little bit hard to get people excited about copyright, still.  I predict that is going to change in a hurry once all the major Internet Service Providers start spying on their users so that Hollywood can sue them.  But we haven't gotten there, yet.

Larry Lessig was a copyright crusader but quit to become a clean government crusader.  His feeling--and I agree with him--is that without taking care of our American problem with legalized bribery, effecting real change of any sort is impossible.  I agree, but I also feel that there is lots of convincing to be done, still.

It would be easier if Americans took their governance as seriously as the Venezuelans.